This year has seen an unprecedented number of of avalanche related fatalities in the European Alps as the snow conditions at the start of the season have promoted the formation of a very dangerous snow pack. With off-piste skiing becoming more accessible with the design of new rockered skis and the ever growing popularity of freeriding, I have decided to write down a few key tips for those skiers looking for their first off-piste adventure. 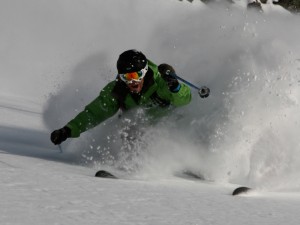 As an off-piste novice you need to gain as much experience and knowledge about mountain safety as you can, in a controlled environment and under the guidance of a seasoned professional before you are ready to tackle the backcountry. There are literally hundreds of avalanche awareness resources. Henrys Avalanche Talks are a must for any skier looking to build confidence off piste. Make use of a guide and/or ski instructor when skiing off-piste and listen carefully to what they say and do, ask questions and write down what you have learnt to help consolidate the information.

Know your off piste equipment

There are 3 essential items to carry when skiing uncontrolled off-piste descents: a shovel, transceiver and probe. They work in conjunction and are redundant for safety purposes unless you carry all 3. Make sure you understand how to use the equipment. Many resorts have “transceiver parks” where you can practice transceiver searches. Go out with friends and time yourself in retrieving buried transceivers. Gradually increase the search area and burial depth before attempting multiple burials.

There are many signs that a slope may be unsafe. Wind is the master builder of the avalanche. Wind can strip snow from windward aspects and deposit large amounts on leeward slopes. Look out for large cornices that have formed above a slope. Sastrugi are striations formed by wind on the snow and are a classic sign of wind affected snow. Look for recent avalanche debris on slopes with similar aspects. Small cracks in the surface of the snow pack indicate instability and the potential for slab avalanches. Listen out for “whumping” noises and pay attention to how much sun the slope has received.

Read the detailed daily avalanche bulletins for the area you are skiing and heed its advice and warnings. The SLF produce excellent reports daily in English. When skiing in a group, leave space in a traverse and ski one at a time. Ski slopes below 30 degrees to significantly reduce the risk of an avalanche occurring. Avoid convex slopes where the snow is under tensions. Stay high and near the top when traversing dangerous slopes. Test the snow pack by making a “cut”, or digging a snow pit to analyse the layers. Avoid southern aspects in the afternoon in spring time. Avoid terrain traps like tight gullys and always plan on escape route or mark a safe vantage point.