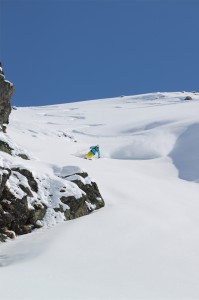 Safety first when going off piste

Once you venture away from the pistes you are putting yourself in added danger: no longer will you be on slopes that are patrolled and avalanche-safe. Make sure you have the correct off- piste gear: a transceiver, shovel and probe, and that you know how to use them. It is highly recommended that you get some training in using your

kit and off-piste safety. Also, make sure your insurance covers you for skiing off-piste – many don’t!

There is a common misconception that in powder you sit back to get your skis out of the snow; in reality this just puts the skier in a tiring position that is difficult to control, with the added possibility of straining some ligaments. There are times when you may need to sit back (such as when you’re straight running along a flat in heavy powder), but in general don’t do it, it’s much better to be the driver not the passenger. 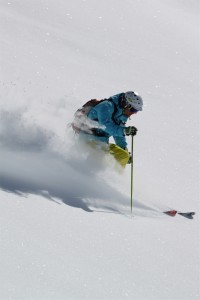 Off piste tips – Don’t sit back!

Unlike on-piste where you have a solid piste to work against, off-piste snow will be soft and moving. Your edges won’t be able to help as much to start the turns so you have to use

your legs. Try extending your legs at the start of the turn – this puts some force on the skis and helps them turn. Through the second half of the turn focus on keep your legs soft so that they can absorb the uneven lumps and bumps – like suspension forks on a bike.

When you’re off-piste there will be many unseen little bumps waiting to throw you off balance. To counter this you need maintain a strong core (the muscles around your spine, abs, back and upper thighs). Think about tensing your stomach muscles tight before heading off. This will keep your upper body strong and still, rather than be thrown around by the terrain and upsetting your balance.